Surviving WFH - End of Week One


I decided I would make into my second stage of the virus, the 'positive' stage. It is probably good I live on my own as I would have been hell to live with the last few days. As the governments of the world, shut the doors, country by country, I resigned myself that this was going to be a long haul but was determined to try and deal with it.

I started the weekend by buying some flowers for my house (why is explained in this earlier post).

I told myself I would shop in local shops, visit a different independent coffee shop each day and support those who needed it.

I even thought, 'if I can't travel for a while', I can practise living at home full time and see how it will feel in retirement. Was there enough here to keep me busy?

I actually got quite excited. Started making coffee dates with friends, thought I would go to the Zumba class just started at church and generally settle into village life.

This positivity, though was short lived. I decided to brave the shops. I don't need toilet paper, a pack of 9 would last me months, so even if I was home full time, as long as I didn't eat much of my own cooking I would still be ok.

But my cupboards were bare, needed the basics. Joke, it was unbelievable. Apparently the germans call this panic buying 'hamstring'. It is as if we are preparing for hibernation. Toilet paper wasn't on my list, but basic things like eggs and pasta, even coffee was all gone. Luckily I am only me and not a family of 4 or 5. 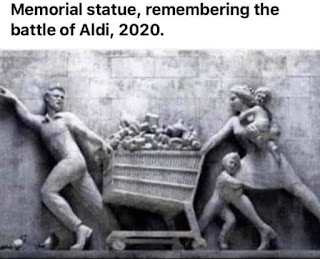 Sunday I drove a little further to a big supermarket, and it was just the same. The I got to the till, it wasn't too bad. A couple being served, and just one other lady before me. The couple were quite young and obviously expecting their first baby anyway. They had 4 packs of newborn nappies, each containing just 20 nappies. I am guessing there were no larger packs on the shelves. The cashier tried to ring them up but it only allowed 3, the limit for that supermarket. The cashier explained and the couple were not rude just bemused. The cashier offered to talk to a supervisor and get an exception, but was told no, it was the rules and the till was programmed to reject > 3 of any item. So the last behind them, said she would put the other packet in her shopping, which she did. Then as the couple walked away, the cashier burst into tears. She said so many people had been rude to her all day, and yet she still had to say no to someone really in need.

Church was quite busy, but we were expecting older people to be told to stay at home so I expect the numbers to be much lower next week. There was no tea or coffee after church and the collection was on the way out, no passing bowls around the congregation.

Trying to stay positive is going to be hard.