Exchange Visits Are Not Just for The Young 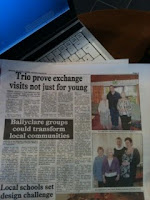 I recently had this published in my local paper about a trip with my silversurfers.

Two residents of Chisholm Court in Ballyclare travelled to Copenhagen last weekend for an exchange visit that came about from their IT Classes.

Originally started by Citizens Online until funding ceased, currently three residents get together informally to learn IT to ensure they have ‘digital inclusion’. They have used their basic IT skills to keep in contact with fiends and family who have left the area, research holidays and understand what help is available for them in all areas of life.  Debra Lilley, the volunteer sourced by Help the Aged (now Age NI), works for Fujitsu and her role takes her around the world speaking at IT conferences. The group track her using email, Google and her blogs. 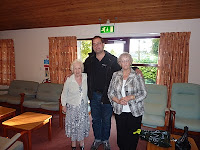 Last year Debra took part in some IT videos for a Danish Company Miracle AS with their CEO Mogens Nørgaard and the group were fascinated by the technology could do and later struck up a friendship with Mogens. He believes that everyone who can should help people to help themselves and in 2008 appeared in the Danish Version of ‘The Secret Millionaire’. He was inspired by the concept of bringing IT to this community and last June he visited Chisholm Court to see for himself where he met Rita Greer and Jean Mottram. (photo 1, L-R, Rita Greer, Mogens Nørgaard, Jean Mottram) 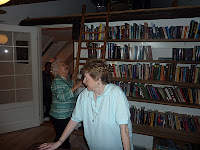 The contact has continued and late last year he was telling the ladies about how his home library was now finished except for cataloguing the books. The lady he didn’t previously meet, Katie Kane (68) was until she retired a librarian here in Ballyclare and soon it was arranged that they would visit Copenhagen to sort out his library. Katie and Rita, who is celebrating her 80th birthday, travelled with Debra and as well as sorting, and storing all the fiction books, they created the plan for the non fiction books. With their help Mogens selected Apps for the iPhone that will scan the ISBN barcode on books and catalogue automatically. They looked at old book collections and even discovered a document tucked inside a book from the German Army instructing their troops on how to behave when skiing in Norway soon after the 2nd world war, a real treasure that Mogens is now investigating further. 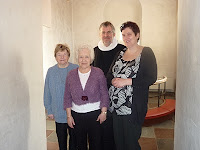 As well as the library project they visited Miracle AS and tried out the directors office for themselves and then had a tour of the city which included the Royal residences which where full of excitement and celebration as their visit coincided with two new additions to the Danish Royal family, a twin boy and girl. They also visited and worshiped with the local Lutheran Church (Măløv) where they were shown around by the minister, Michael Andersen. (photo 2, L-R, Katie Kane, Rita Greer, Michael Andersen, Debra Lilley)
Posted by Debra Lilley at 11:52 No comments: