Last night I went to a concert of my childhood favourites, The Bay City rollers. 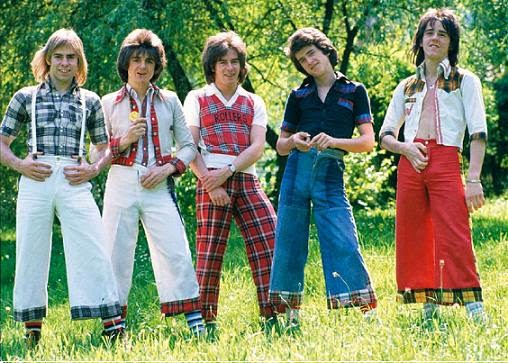 When I was 13 I lived in Germany where my dad was in the army, we lived in a very British community but with news from back home restricted to what was in the Sun newspaper and even that was about 2 days after the fact. This was 1975 and the height of the Bay City Rollers popularity. I remember one friend, Jacqueline and I wore tartan trews all the time, and we flew back to England in the holidays dressed that way, much to the embarrassment of our parents. I specifically remember standing at the top of the steps from the plane and not understanding why everyone wasn't dressed that way, 'the Sun' said they were bigger than the Beatles!! 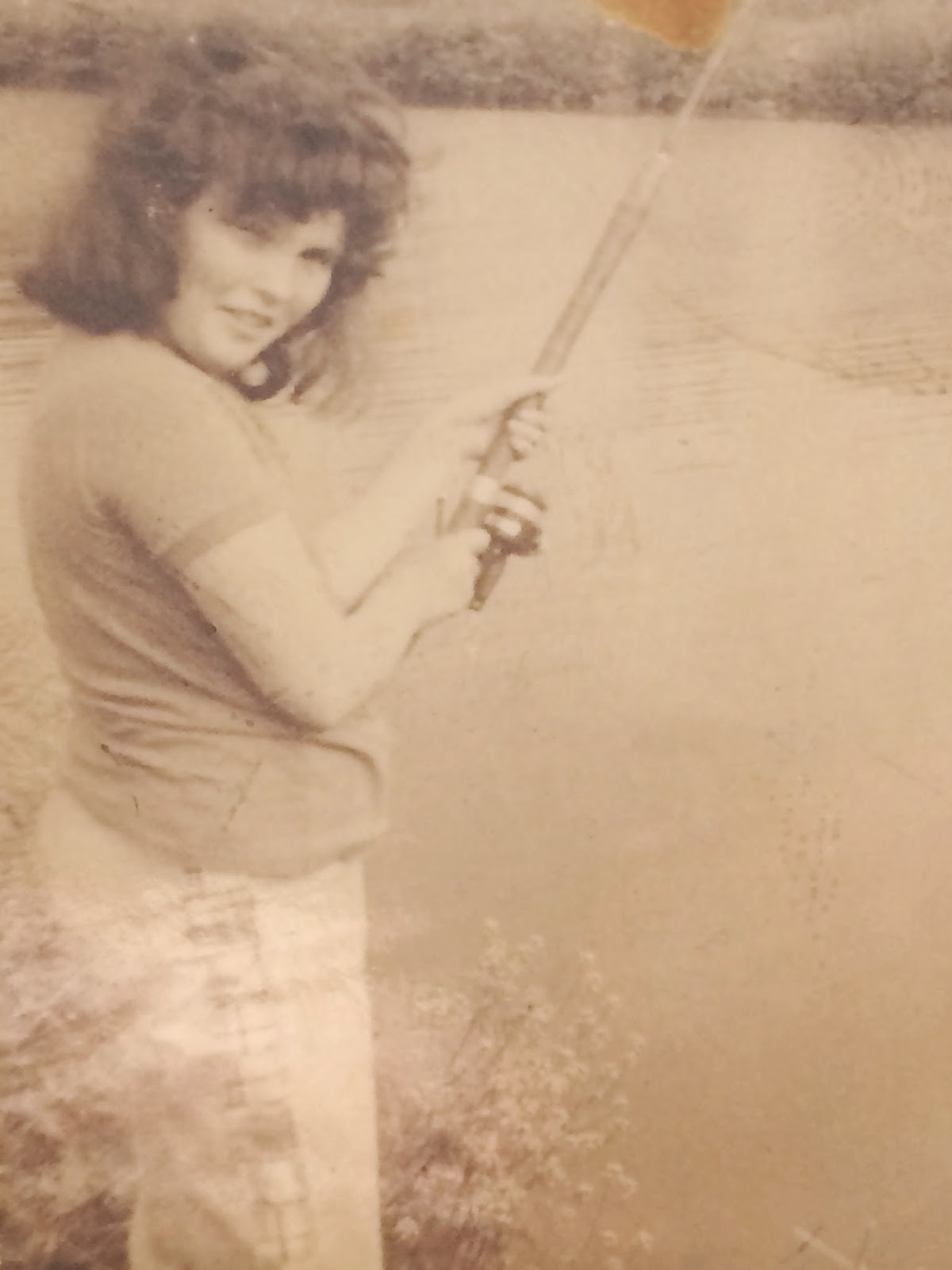 I did find an old photo of me at the time, very faded but I know it was a BCR t shirt and you can just see the tartan on the trousers.

This was an amazing concert, much anticipated and a sell out crowd.
Local shops had sold out of both tartan and incontinence pants as ladies of a certain age got ready for the event of the decade. I did have a friend with me but have decided not to name her as she has a professional reputation to uphold.

Only one member of the 'famous' lineup remained, Les McKeown but that didn't matter, the five old men on the stage could have been anyone, no-one would notice. They sang well but again you couldn't hear the detail above the screams of the old ladies. My heart throb from the main lineup was 'Woody', he wasn't there but the 'new' old bass player was quite attractive from where I was sitting. 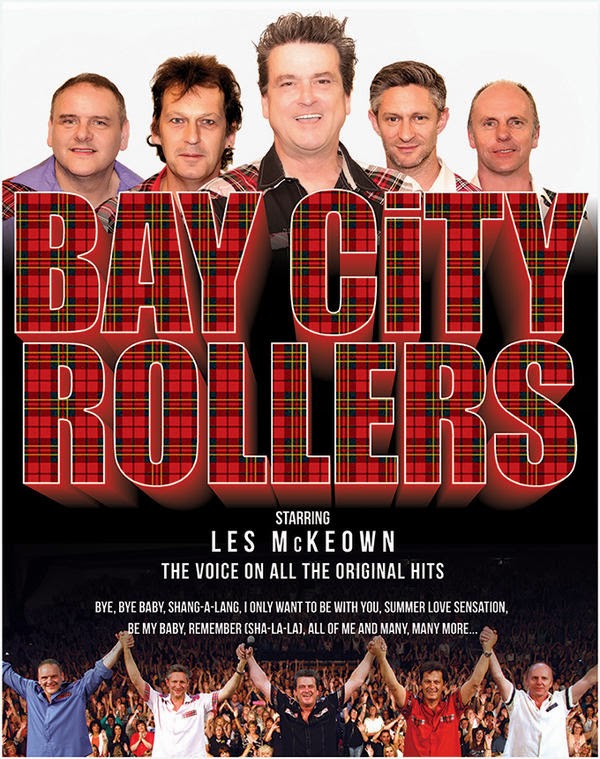 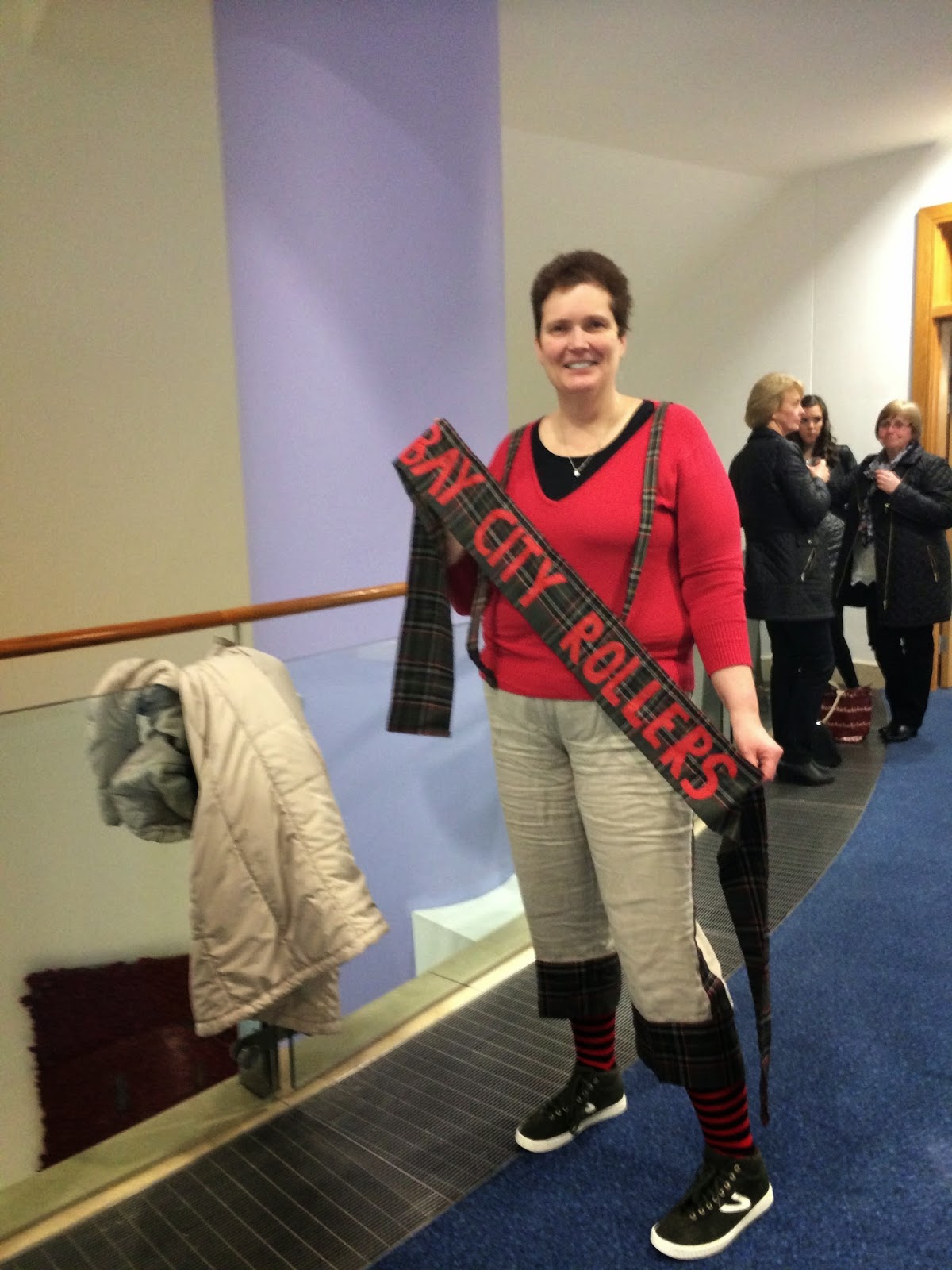 According to the 2011 census Northern Ireland has approximately 100,000 women between the age of 50 and 60 (the demographics for this concert, those who were teenagers in the BCR  heyday of 1975), and the Waterfront hall sits 2,250, so over 2% of all those who could attended this event. I did see a few men, not many and they all looked like a lone woman who has wondered into a lap dancing club in error.

All the ladies danced all night, probably because if they sat down they would never get back up again, and I am sure I am not the only one today suffering from sore arm muscles from holding a scarf above my head all night. Probably the equivalent of planking for teenagers. But we were not as old as the band, the breaks between songs were quite long as they got their breath back and swigged from bottles I am guessing contained sanatogen! in the middle they did quite a long instrumental piece which i am sure was to help them recover. 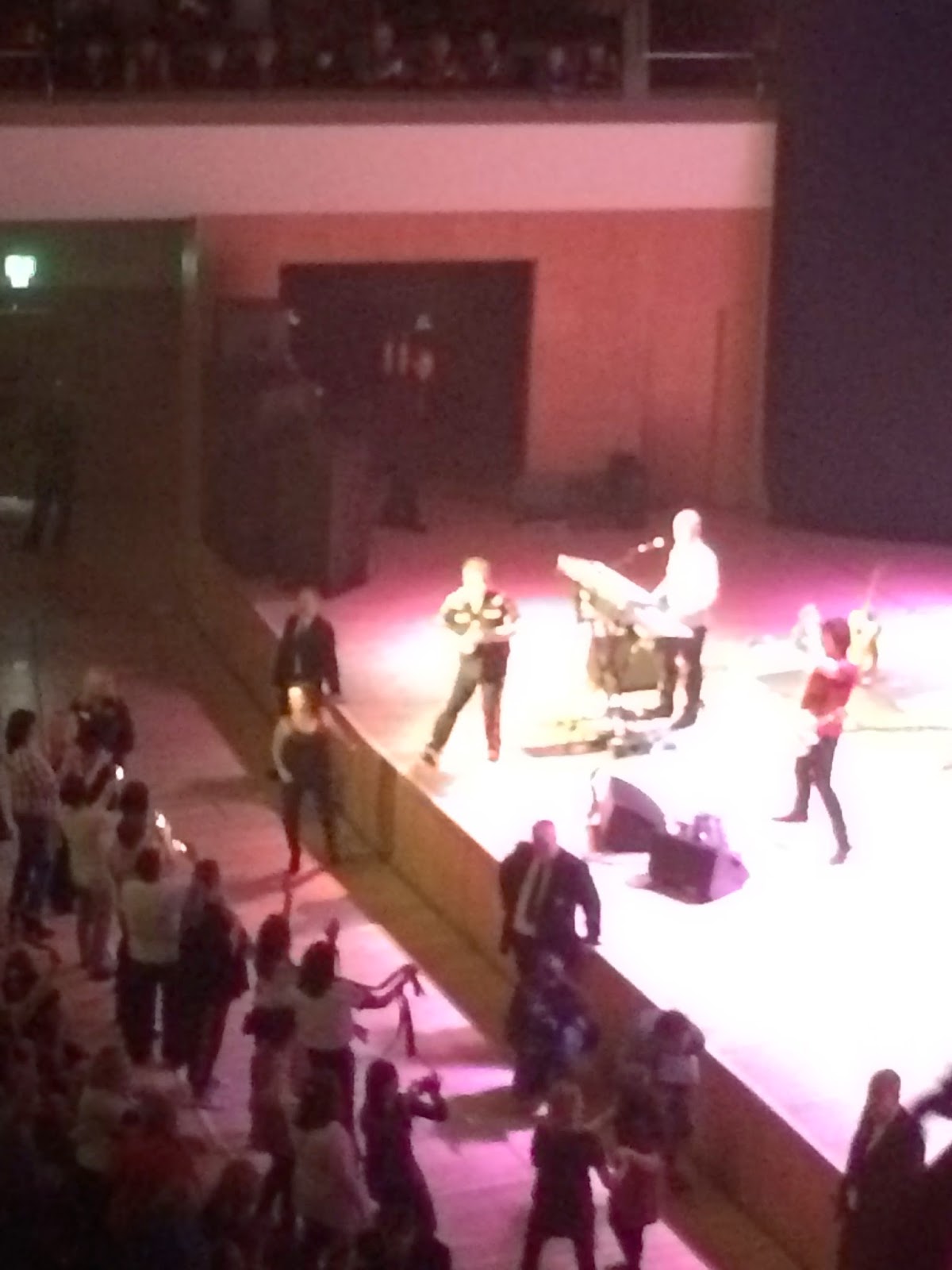 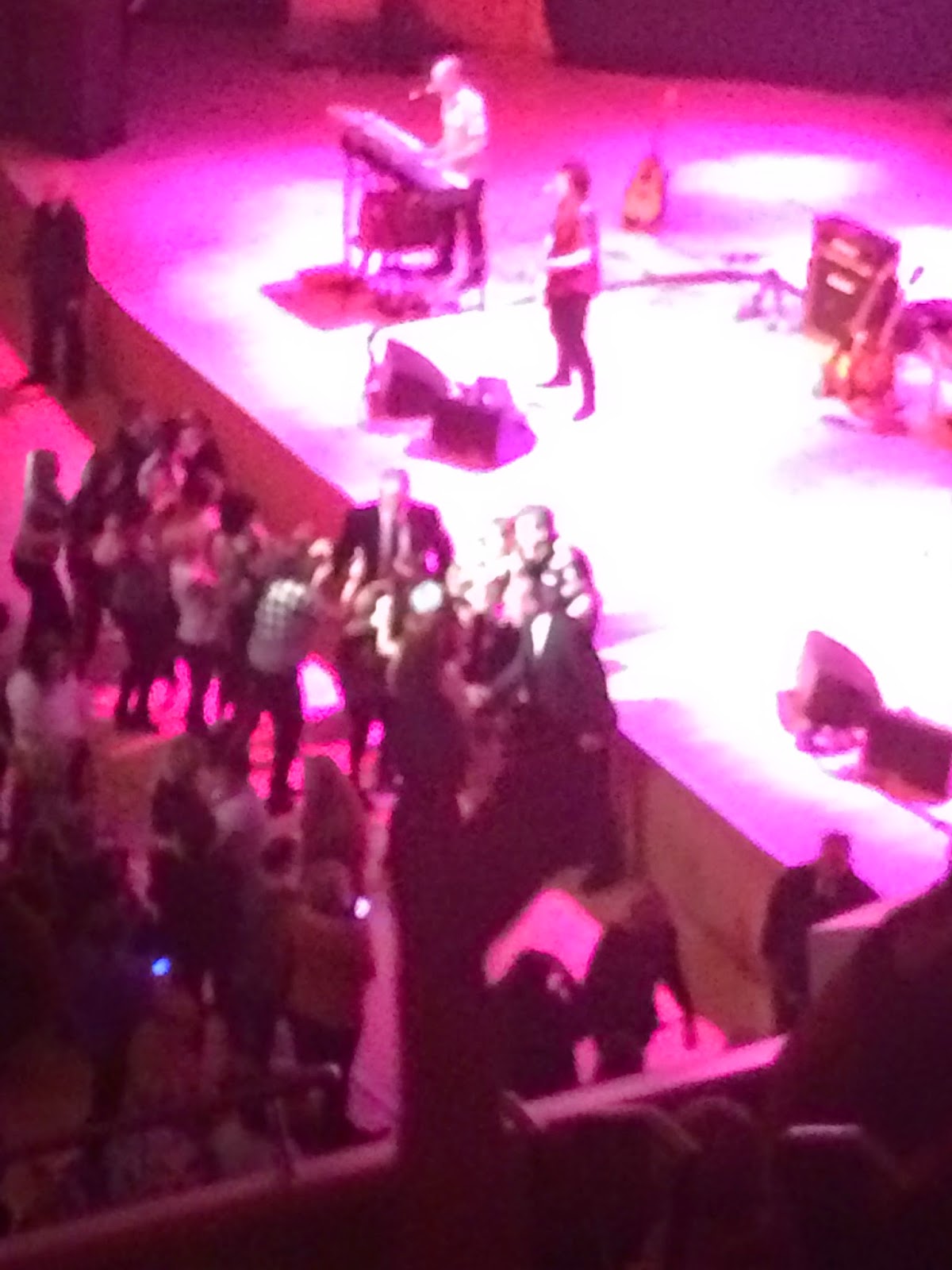 The crowd were pretty good, to start with a few brave ones would approach the stage to give flowers or a scarf, and they queue well, guess we have plenty of practice queuing for our pensions, but then Les kissed one lady and the crowd went mad, it was our equivalent of Black Friday, like if Asda reduced bread by 10p a loaf, the crowd went mad. Luckily the bouncers who all looked geriatric but were probably younger than the band, soon brought order back to the chaos.

Many of the crowd dressed up, some ladies appeared to have the same haircuts, and the same clothes, pity their figures weren't the same. I had a new outfit I made for a party in Seattle last year, so felt so pleased I didn't throw it out. Felt great.


They played all their old hits and just a couple of covers, including Daydream believer which just made me cry.

All too soon it was over and of course they had to finish with Bye Bye Baby, but the old ladies had a great time, and now they need to recover, after all it is only 8 days till '50 shades' is released.