It’s June so it must be Wimbledon.

Early this year UKOUG held an event in conjunction with IBM on upgrading. It was planned that Oracle would kick off the day with Upgrade Best Practices but I was asked if I would do so instead. As I had just returned from Collaborate and this had been a key message I was happy to do so.

The event was held at the Magic Circle in London which is a great venue…. If you like magic which I don’t as I don’t understand it and am therefore not in control, however my boss attended and he loved it.

Warren Daniels from IBM (with the Optim product from one of their acquisitions Princeton Softech ) promised to make up for this in the future and I was really pleased to pick up a message from him last week inviting me to Wimbledon.

Totally out of character the day was sunny, I was in Birmingham on business the day before and travelled by train down to London, this in itself is a novelty for me as I normally fly from Belfast direct to where I need to be; anyway I was very impressed by the speed and service but not the cost. 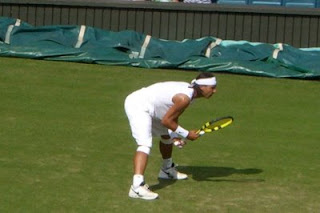 IBM is the official providers of IT to The All English Tennis & Croquet Club who host Wimbledon, and their corporate facilities were excellent. We partook of all the quintessential things associated with Wimbledon, Champagne, Pimms, Strawberries and Cream as well as a great lunch, but what we were really there for was the Tennis. I had tickets for Centre Court and watch Venus Williams have to work for her first set against the almost unknown Naomi Cavaday from UK, and then Nadal stride to a 3 set victory over Beck. I had hoped to watch Andy Murray but he was only just about to start when I had to leave, the downside of buying a cheap Virgin ticket is set trains. 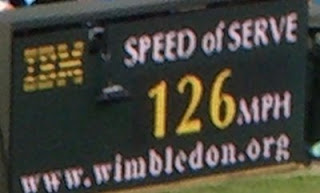 We also had a tour of the IBM IT facility where statistics and results are processed, provided to the media and on the official website with mind blowing speed. But what really amazed me was that all the statistics are entered manually from specially designed keyboards, backhand, ace, let etc. As the guide said the most technical bit was a sticker on the keyboard telling the operator who was player A and player B. For big matches two people enter and there is always a paper backup. Then IT gets to work and cuts the data any and every way. So next time you see the statistics on the screen remember someone entered all that by hand!


Not a bad way to spend a Tuesday in June, thank you Daniel and did I remember to tell you reader…. I love my job.
Posted by Debra Lilley at 12:40 No comments:

I don't want the box!

I am not a member of the fanatical green brigade but do not like waste. My current big hate is unnecessary packaging. This week in the US I have had so many boxes that simply exist to help a machine pack them into bigger boxes.

I flew over last Friday and had a box on the aircraft that contained a packet of crisps (chips for those of you reading this in the US), and a small bar of chocolate. Why?

Then at Newark airport I decided to have an ice cream and that was as expected in a wrapper, but wait for it, the wrapped ice cream was in a box.

My hotel gave me a take out breakfast bag, a beautiful, high quality bag, advertising the hotel and inside was… you guessed it, a box, and inside the box was a carton of juice, a lovely wrapped muffin and an apple. So give me a box or a bag but not both.

And then that makes me think about bags. In the UK now supermarkets don’t give out plastic bags free of charge to encourage you to recycle. But clothes stores have more and more fancier bags to advertise themselves. I don’t need them either. As I’m in the US and the dollar is weak I do a lot of shopping, when I pack to leave there is an entire collection of pristine shopping bags left in the hotel.
Posted by Debra Lilley at 16:06 No comments:

The best blogs I have read are the ones where the business thoughts are separate from the personal thoughts and if this works that is what I intend to do.

So having written my first business blog this is the first private one. If nothing else it will embarrass my daughter.
Posted by Debra Lilley at 13:04 No comments: